The Misery High Wiki
Register
Don't have an account?
Sign In
Advertisement
in: Male Students, Class of 2016 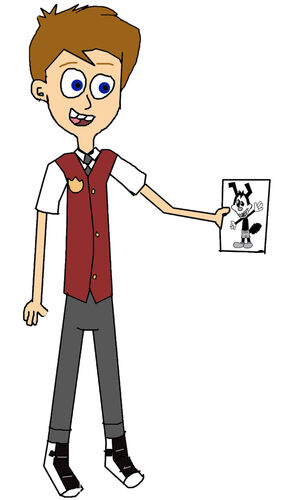 Grade (if a student): Freshman

Era of death (if ghost/undead): n/a

Cause of death (if ghost/undead): n/a

Dislikes: Math, Jerks, running, being mistaken for a girl

Personality: Stan is pretty laid back. He has a very outgoing personality and he has a great sense of humor. He always makes right joke at the right time and always makes people laugh. He is good at making friends and loves showing his friends his favorite cartoons.

Bio: Born in New Hampshire to Jake Jordan and Stephanie Jordan, he grew up in a small town. He grew up on cartoons and loved watching them. He enjoyed watching Looney tunes and several other cartoons. When he got a bit older he started to draw his own cartoons. He would make flip books and show them to his family. He fell in love with black and white cartoons and he came up with his own two-tone character George the George. He created George to not be any specific animal but a bunch of animals put together creating a species called a george. Stan always told everyone that asked what kind of animal is George, that George was a George from the island of George. He created a ton of Supporting characters for George that were non-two tone characters like Pete the Dog, Raulph the mouse, Jimmy, Spook the cat, Chuck and Lucy the monkeys, and Phil the groundhog, a character based off Punxsutawney Phil. When he started to learn how to animate he brought these characters to life.

His Parents were both TV executives and were very busy people. They loved their son but they didn't always have a lot of time for him. Stan is the oldest of 4. He has two sisters, Rachelle and Tina, and a brother jayjay. When he became old enough his parents decided it would be easier to send him off to school. They found Misery high. Stan and his parents agreed that that would be the school for him. Stan new his parents were busy people but he wished that he didn't have to go away, though he was excited to meet new people and he hoped he would meet someone who shared the same interest in cartoons as him

Stan is average height for his age,  He has blue eyes and brown ruffled hair.  He wears the required uniform for Misery High.

Community content is available under CC-BY-SA unless otherwise noted.
Advertisement